Based in rented offices in Edinburgh’s shore area, Leith, Trust Recruitment has been a Brightwater customer since August 2016. It is a care focused business that recruits nursing and care staff for organisations in the care industry and was set up by Calum Harris & Joanne Sullivan in October 2015.

Calum explains: “I was dissatisfied with the water supplier we had inherited from the previous tenants when we moved into our office on Constitution Street so I put an announcement on LinkedIn asking for recommendations for a new water supplier. 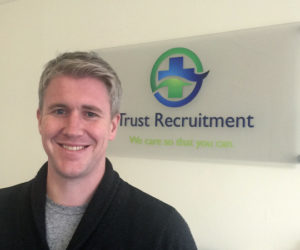 Part of our company ethos is to work with local suppliers and support the local community so when Roger Green, Brightwater’s CEO, contacted me in response to my LinkedIn notification I was interested in hearing what he had to say.

Roger resassured me that we weren’t tied into a contract with our existing water supplier and explained that there were other ways of calculating our water charges rather than simply basing it on the rateable value of the office building.

The previous occupants employed between 12-16 staff in the same office space. We were a two-man team and neither of us drank tea or coffee so we felt that we were not being billed a realistic amount.

As a start-up business any extra costs significantly impact on our P&L so we needed to save money wherever we could and our utility bills were a good place to start.

Our water charges were being based solely on the ratable value of our property andRoger advised that there was a more accurate way of charging for our water usage which would reduce our bills.

This advice coupled with the competitive tariffs we were being offered convinced us to switch to Brightwater. The company reassessed our water charges so that they were no longer based solely on the rateable value of our office building but on an estimation of how much water we actually use.

We now use Brightwater as our water provider and they have put us on their lowest tariff and bill us monthly. The bill is paid by direct debit and I no longer need to worry that we are being over charged for an essential service.

Brightwater has saved us around 63% of what we were previously charged annually. That’s a saving of over £1,000 a year which, for a small business like ours, makes a big difference to our bottom line!

I’m very satisfied with the service I receive from Brightwater and am happy to recommend them to my contacts. I have just suggested that my accountants might want to consider switching and as the company’s strapline proclaims it is ‘surprisingly simple’.”